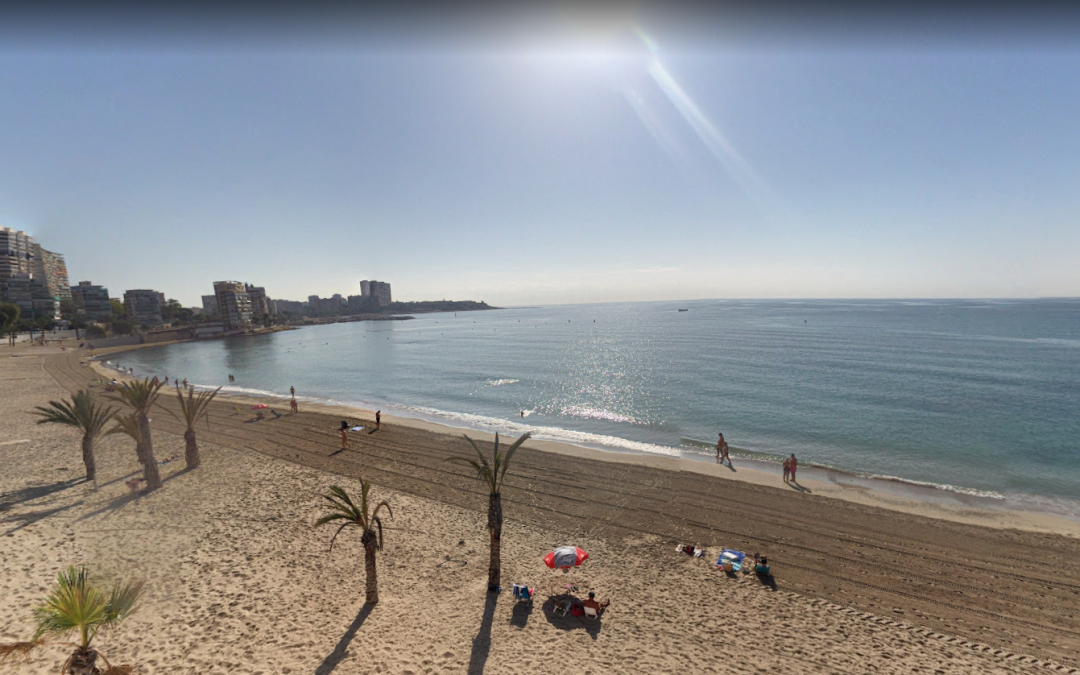 Playa de la Albufereta is a small, suburban beach – 423 m long and 20 m wide. It is located between the center of Alicante and San Juan beach, exactly in the north-west of the city, between the Sierra Grossa mountain range and the Tossal de Manises hill. Albufereta has the same name as the district in which it is located. This charming beach is distinguished by delicate, golden sand and palm trees growing on it. A water is clean, usually calm, with gentle waves that are not disturbed by storms and strong winds. What’s more, the mouth of the Juncaret gorge, where rainwater is collected, is located on the beach.
Without a doubt, the Albufereta beach belongs to a group of “family” beaches, perfect for children, because a water is not so deep and even after a few meters it will not cover them completely. In addition, there are two playgrounds, that will certainly give a lot of fun for the youngest. On the beach you will also find bathrooms, showers and exercise equipment. If you would like to swim on the sea in a less traditional ways, pedal boats and water scooters rentals are waiting you. If you don’t want to bring sun loungers and umbrellas, you can rent them on site. In the water there is also a free, separated zone with sun loungers and umbrellas, which is intended for the elderly persons. A group of rescuers takes care of safety. In the middle of the beach there is also a booth with cold drinks and snacks. However, if you want something more sophisticated, you can join the nearby “Club Náutico” or go the Albufereta district to find some restaurants.
The best way to get to the beach is going by the tram lines 1, 3, 4 and get off at the Isleta stop, from where you can go straight a few meters through the Avenida Condomina. You can also go from the center by bus number 21 and 22 and get off on the Condomina 8 stop, from which you are only 300 meters from the destination point. When you go by car, by accident you can pass the beach and you will not be able to admire its view. It is hidden under the road, which on the other hand undeniably it adds to its charm.
If you enter the beach from the south, you will see a modern pedestrian street leading down, made of materials such as marble and granite, with metal handrails, benches, rubbish bins, various vegetation and trees. This place gives a sense of isolation from the blocks and busy street, which is above. The entrance is gently sloping and adapted to people with reduced mobility and for those who go with a pram. If you care about a time, you can shorten a route by choosing the stairs that lead you straight to the beach.
In the northern part of the beach, you will be led by a wooden path, which is located in the historical part of the beach – during the Roman rule, the city was located on the shores of Albufereta. You can observe, how sand gives way to the rocks or hit the traces of ancient civilization in the form of the remains of a quarry and a reservoir, which was used at that time to store rainwater or river water. At this point it is worth to immerse yourself in the water and feel its warmth, which is due to the action of this thousand-year bathing system.
History talks about a meaning and importance of the port in the Albufereta. It’s obvious, that its geographical location has perfectly protected it against a wind and storms, which facilitated its defense in the events like sea battles, influenced the growth of trade and abundant catches of fish. Due to its size, medium-sized vessels, both commercial and military, were moored there. Hence, the inhabitants of Alicante tend to tell legends about sunken galleys off the coast of this beach.
Considering all these aspects, we can say that the Albufereta beach is and was an important and significant place for the present and the past of the Alicante city.