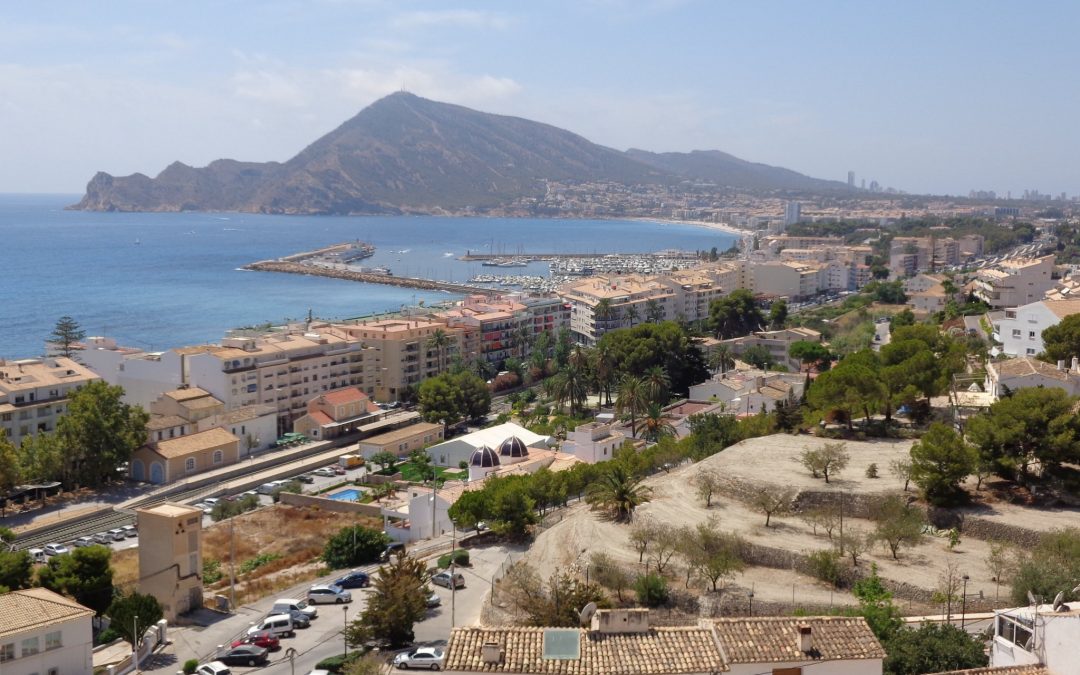 Is it for sure Spain, or maybe Greece? Such a doubt may arise after the visit to Altea, the protagonist of our today’s entry. It is the second precious stone in our chain of posts dedicated to places in the province of Alicante, which seem to steal a piece of the heart of every visitor.

Located 60 km from Alicante, in the middle of Marina Baja bay, the town of Altea is surrounded by the Algar River, the Sierra de Bernia mountain range, the Sierra Gelada and the El Peñón de Ifach park. It is also covered by the clear waters of the Mediterranean Sea, which together with the blue of the sky contrast with the white facades of the houses. They surround the Church of the Iglesia de Nuestra Señora del Consuelo, with famous, characteristic blue domes. This is not a sight typical of Spanish towns, it drives our thoughts off the coast of Greece – not without reason, because Altea is called the Spanish Santorini. This unusual landscape attracted and inspired bohemia, thanks to which the town became a neck of the wood of artists, and the only studies, that can be taken here are those at the Faculty of Fine Arts at the University of Miguel Hernandez. The creative atmosphere, that hovers in the air combines with the feeling of peace and tranquility, which tourists seek here. The name Altea itself comes from the Greek Althaia, which means “I am healing”, and some streets bear names such as Remedios (medicine), Salud (health) or Consuelo (consolation, relief) – that’s why a trip to the town, like a visit to a sanatorium will be a great remedy for any worries or minor ailments.

The history of Altea is rooted in the achievements of many different civilizations, including Iberians, Greeks, Phoenicians, Romans and Muslims, which have left their mark on these areas. However, Altea gained city rights only in 1279, after joining it by Jaime I to the Kingdom of Aragón. In the sixteenth century, the areas located at the mouth of the Algar River were desolated and remained uninhabited until 1617, when the city of Villa de Altea was created in the area it occupies to this day. After the expulsion of the Morysks in 1609 and many pirate invasions, Altea entered a period of economic stagnation, which lasted until the early 18th century. In 1705, during the war of succession, an Anglo-Dutch unit arrived to the town’s shore, which supported the Archduke Carlos de Austrii. The troops stopped in Altea on their way to Gibraltar to replenish the supply of drinking water and food, which contributed to the development of traditional farming, which for many residents became the main source of livelihood. In the 18th century, in addition to the heyday of the agricultural sector; fishing, sea and land transport were also revived, contributing to the economic and demographic growth of Altea.

In 1869 the tunnel del Mascarat was hollowed out, thanks to which it was possible to connect the road from Alicante to Valencia, which was just passing through Altea. In 1889, the construction of the railway on the Alicante-Denia route was approved, which in turn opened the town’s door for vacationers. At the beginning of the twentieth century, more and more tourists began to take Altea for their holiday destination, which in turn caused the transfer of urban life and shopping centers closer to the sea. The city began to develop between Calle del Mar street and Plaza del Convento square, increasingly away from the buildings of the old city. From that moment, demographic growth began to be recorded, which contributed to the emergence of new buildings in a small part of the town near the sea. The 1970s were, in turn, the period of the artistic prosperity of the city. It was then that it became a cultural center, to which, like moths to light, attracted crowds of artists from around the world, in order to organize various events related to art or in search of their place on earth. The residents of the city were mixed up with such personalities as Rafael Alberti, Federico Muelas, Pepe Sancho and Sergio Dalma. So Altea gained the status of a marina for painters, musicians, people connected with the cinema, who gradually formed a bohemian climate, that hovered to this day in the town, which seems to reach every nook and cranny.

When planning a trip to Altea, you should first of all buy comfortable shoes, because the main attraction will be a long walk. Sounds plain? Nothing could be more wrong – the Altea can be walked several times, and every stroll will surprise you with another charming corner, which previously could not be discovered. As befits every coastal town, Altea boasts a seaside promenade with charming, relaxing views, that effects on your body and mind. On the city’s coast, about six kilometers away, there are also fantastic beaches. In an unofficial, subjective ranking, the La Olla beach with small islets emerging from the water is the best. On the outskirts of the city, you can enjoy the charms of the beach Barreta and Cala del Soio, surrounded by pine trees, rocks and characteristic houses. Another landscape will be served to you by the Cap Negret beach, wrapped in volcanic rocks, which it owes its name to. La Roda is, in turn, the most-frequented city beach. Still not enough? You can choose from Cap Blanch, El Mascarat and Solsida – the latter adapted for nudists, where you can sunbathe every part of the body in peace.

Obviously, a visit to the old town is mandatory, which is known as El Fornet. You can see the blue domes of the Nuestra Señora del Consuelo church, which are on the postcards of the city. It is worth deliberately getting lost among the cobblestone, flowery streets and white houses with blue tiles, to accidentally find a craft shop or one of the viewpoints. In Altea, there are also hidden hermitages and watchtowers, from which the Berber pirates were watched. Other historical remnants, that have been preserved are the remains of the castle and the ruins of Fort de Bèrnia, which was built around 1562. An interesting fact is that it was here, when the first Orthodox church in Spain was erected, a replica of a Russian church from the 17th century, and materials from Ural were used for its construction.

Although Altea is a place where many seek peace, relaxation and rest, it is worth remembering that it also has a second, party face, which reveals especially during the summer. From June to September, there is basically no week in which there would be no reason to celebrate – both public and local holidays are celebrated. If you want an unforgettable experience, it is worth planning a trip to Altea on August 10, which is the celebration of the San Lorenzo (Saint Lawrence) day. You can then be a witness of a breathtaking spectacle of fireworks, lit after dark over the Mediterranean Sea.

You can get to Altea in several ways. When choosing a car, from Alicante you will get here by the national road N-332 or the AP-7 motorway. No car, however, will not be a problem, you can go on the Alsa bus tour (cost about 9 euros) or use the TRAM connection (lines L1 and L9, cost about 4 euros). Have a nice trip!