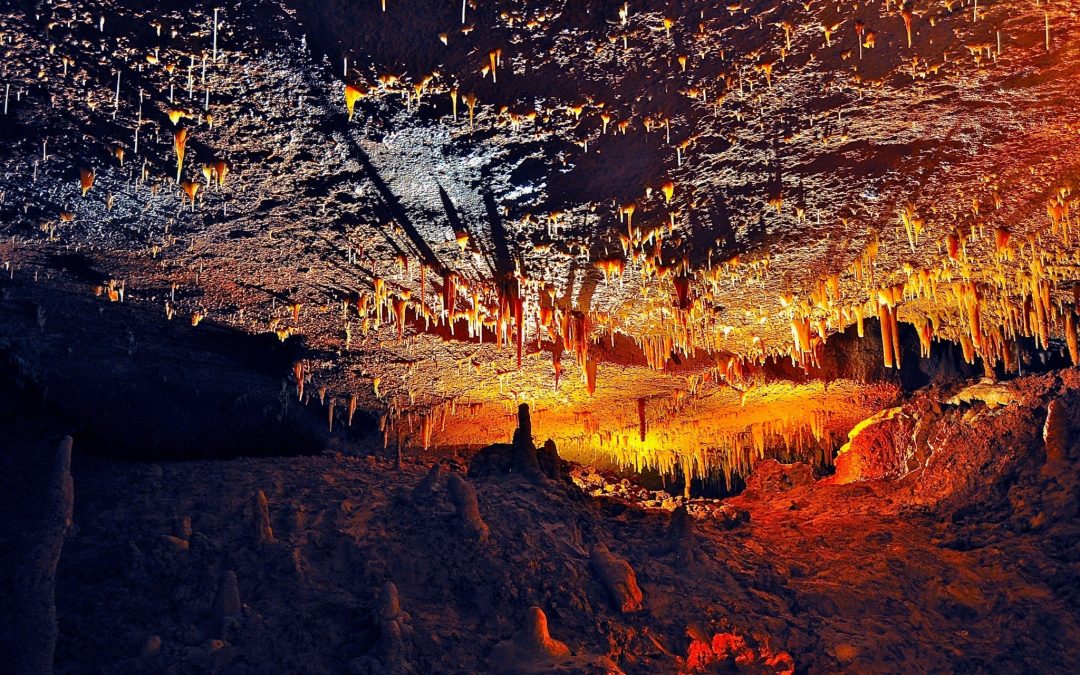 Certainly many people going on holiday to Alicante, in addition to visiting the city itself, will decide to rent a car and set out on a Costa Blanca trip. We hope that today’s post will be an inspiration to plan just such a trip. It will not be a long escapade, because only eighteen kilometers from Alicante, in the heart of the Costa Blanca, in Busot is one of the geological treasures of the province – caves of Las Cuevas de Canelobre. This is an extraordinary place which, with the passage of time, has become a very impressive cave, decorated with fanciful stalactites seems to be a landscape taken straight from Tolkien’s novel. The age of the cave dates to about 140 million years, but interestingly, the cave is not yet “finished” – it is estimated that it is growing at the rate of one centimeter of stalagmite growth for about 100 years. Las Cuevas de clobre is located at an altitude of 700 meters, on the northern slope of Mount Cabezón de Oro, one of the few forms in the Bethic Mountains from the Jurassic period, which can boast a karst cave.

In the more than 80,000 square meter cave, you get through a 45-meter tunnel, in which water has carved various forms such as stalactites, stalagmites, columns or jellyfish. The vault is located at an altitude of 70 meters, making it the highest cave in whole Spain and makes it resemble a majestic cathedral with great acoustics. The elaborate forms, that stalactites and stalagmites have taken, can affect the imagination. In addition to the dragon’s head or jellyfish, you can also find here an impressive natural sculpture reminiscent of the “Barcelona Sagrada Familia”, which is distinguished by a rock column with a height of over 25 meters. In the middle of the hall there is also a stalagmite about 100,000 years old, called El Canelobre. In Spanish, it means “candelabra” and cave owes its name.

When it comes to the history of caves, until the nineteenth century, there was almost no information about them. According to the Arab chronicles found, they were discovered in 740. It is interesting, that the name Cabezón de Oro, in which the caves are found, refers to gold (Spanish oro – gold), but in reality it has nothing in common with this material. In the era of Arab rule, this mountain was called the Iberian word Ur, which meant water, because inside it, in the caves Cuevas de Canelobre, there was just water. After the conquest, the name erroneously evolved phonetically into Valencian – “Or”, or Castilian – “Oro”, meaning something completely different. The new name, according to the local legend, was extremely misleading and many daredevils tried to find gold in the cave, which turned out to be only water. The cave itself was closed to the public until the middle of the 20th century. On the other hand, during the Spanish Civil War, it served the Republican army as a repair workshop for aircraft. It was then, that the entrance to the tunnel was drilled and other parts of the cave were discovered.

A trip to the cave, which lasts about 40 minutes, will certainly be a great adventure not only for adults but also for the little ones – you can feel like Indiana Jones and combine discovering new places with gaining knowledge about natural geological forms, that are shaped by millions years. However, in addition to the traditional visit, Cuevas de Canelobre offer other attractions. Among others, a zone for speleological exploration was prepared here. However, this is entertainment for those who are experienced in this field and who possess specialist equipment. In addition, thanks to the great acoustics prevailing in this place, concerts are organized throughout the year, complemented by visual effects. In addition, in the area of ​​the cave there are hiking trails, that can be overcome while admiring a breathtaking views. In October, a 37.5 km mountain bike race is also organized.

If you are going to the caves by car from Alicante, the best way to get to them is the AP 7 highway, following the signs for El Campello and Busot. During the summer season, a special bus line is started, which will take us straight to the caves and back. It works only on Saturdays and Sundays in July and August. The bus departs from the Estación de Autobuses de Alicante station from platform number 13.

Tickets can be purchased at the box office or on the Instanticket website.

Combined ticket: visiting caves and the Museum of Ethnic Music (located in Busot):