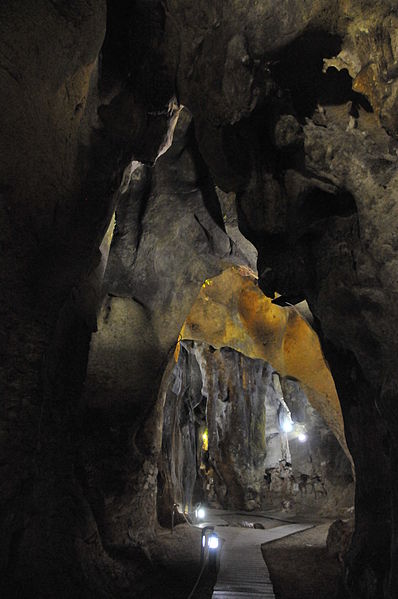 Many of our articles have been dedicated to the surprising and beautiful places of the province of Alicante. In today’s entry, we will focus your attention on the next one – the Cueva de las Calaveras cave. The cave is located in the Sierra de Seguilí mountain, which belongs to the Sierras Diánicas range, crossing the province of Alicante from the southwest to the southeast, making it the most rocky place in the provincial orography and one of the most diverse and rich geologically. Specifically, the cave is located in the small town of Benidoleig, a few kilometers from Pedreguer. Without much effort and difficulty, visitors can admire this interesting karst form, which is the result of thousands of years of evolution limestone rocks. The cave is located at an altitude of 70 meters, from the north, and its length is 440 meters. In its interior are hidden stalactites, stalagmites and domes, that reach up to 50 meters in height. What’s more, it is almost sure that the cave was inhabited by a man about 130,000 years ago.

Despite their old age, there are no documents that would confirm the exploration of these areas until 1768. It was then, when the cave was conducted by the botanist Cavanilles, during which skulls were found, and then the place owes its name (spanish: calavera – skull). The remains found belonged to twelve Muslim farmers who died in the cave trying to create a water drainage system. This event aroused the imagination and gave rise to a legend, that talks about the bones of the Mauritanian king Ahlí Moho, known for his wealth and harem, numbering 150 women, who had to hide in the cave against the El Cid Campeador – spanish knight.

In addition to skeletons, Cavanilles encountered graves of people from the Paleolithic and Neolithic period, tools such as axes, arrowheads, cooking stones, and bones of bears, hyenas, horses, hippopotamuses and rhinoceroses. A large part of these finds are now used as exhibits in the archaeological museums of Alicante and Alcoy.

It is interesting to note, that after the 18th century finds, which have been called a milestone in the history of the cave, it was not made available to tourists until the 20th century, when the cave served as a shelter and warehouse during the Spanish Civil War. In the 1970’s, the work began adapting the grotto for typical tourist purposes. Thanks to this, the cave has a tour zone for all interested people and a second one, accessible only to speleologists and authorized persons. You can come inside by an entrance with a dark color, which is probably the result of soot from bonfires ignited by the local population in order to warm up and scare away wild animals inhabiting these areas. A large facilitation at the entrance are wide stairs, adapted for prams and wheelchairs. There are also information boards in five languages, music playing in the background and a properly adjusted lighting system. The whole complex is divided into rooms, that are proper called:

Sala de los murciélagos, or bat hall, in which these animals, having their hideouts in the vault, prowl at night.

Sala de los huesos, meaning a hall of bones, where remains of people and animals such as deer, horses or even a hippopotamus (more precisely its tooth) were found. There are also panels, that depict the evolution of man.

Sala de la campana, or bell room, where stalactites hang from vaults and stalagmites grow from the ground. Between them there is also a formation with impressive dimensions, which is called a bell – as given by the locals, when touched, you can hear a sound similar to the bell. In addition, thanks to information panels you can learn more about the formation of both stalactites and stalagmites.

Sala de los helechos, or fern chamber, is dedicated to these unique plants, which practically do not need solar energy, but for their growth a high humidity is necessary.

Sala del lago azul, or the hall of the blue lake, which used to be located in this place. It reached a length of 12 meters and tried to use them for irrigation. Currently, it is covered and paved, so you can go through this room without any problem.

Sala de los fósiles, a fossil room with interesting fossils and where you can learn about the process of their formation.

Sala de la balsa, or a raft hall, with remains of a wooden ship, bones and twelve skulls, which the cave owes its name to.

Sala de calcita, or calcite room, is part of the cave where you can admire the crystallized quartz. From the panels placed in the room, you can read a lot of interesting information about minerals.

Sala de los ammonites, or ammonite room, on whose walls there are remains of ammonites, or shellfish from the group of cephalopods, living several million years ago. They are an extremely important tool to help determine the age of rocks.

The entire complex has a large, free car park, a bar, a souvenir shop and a playground.

How to get to the cave from Alicane?

The distance between Alicante and Cueva de las Calaveras in Benidoleig is 92 kilometers. Departing from Alicante, take the A-70 road, then follow the AP-7 road towards Villajoyosa/Valencia for 68 kilometers, then take exit 62 towards Denia, continuing the route CV-731 towards Ondara/El Verger/Orba. After driving 5.5 kilometers, take the CV-733 road (Carretera de Pedreguer) and drive it for about a kilometer, turn right to reach the destination.