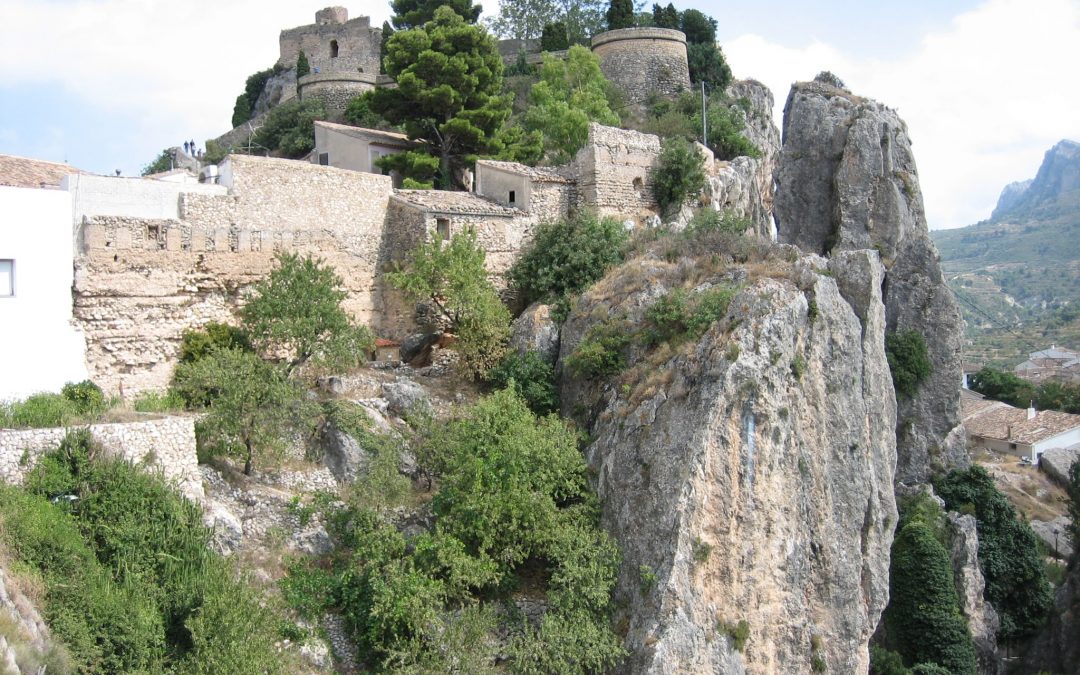 In previous entries, we tried to refute the myth representing the province of Alicante as a land with beaches and sun, describing the towns and villages hidden inside it, which definitely break with this stereotype. However, if we have not been able to persuade you to change this vision so far, today’s post will be a heavy caliber weapon.

We are going a little over 60 kilometers north of Alicante to visit Guadalest – a medieval town with only 208 inhabitants, which has been named one of the most beautiful places on the Costa Blanca and even throughout Spain for a reason. Although it is located in close proximity to the coast, its surroundings are nothing like coastal landscapes. Guadalest is surrounded by a charming valley with the same name and the highest peaks in the entire Valencian Community – in the north there is Morro Blau (1126 m), in the south Pico de Aitana (1558 m) and in the west Llano de la Casa (1379 m) ). The urban building of the village consists of two parts. The first is the medieval district, also known as the castle district, surrounded on one side by a defensive wall, and on the other protected by a mountainous slope on which residential houses seem to grow. The second part is the district of Arrabal, erected outside the city walls due to the increasing number of inhabitants. It is the best place to start sightseeing, strolling through the streets and discovering the nooks and crannies where the history, culture and customs of Guadalest are hidden.

You can go to the castle district on foot or drive by car, which you can leave in one of the city car parks. Then, going up the narrow and cobbled streets, you will reach a stone-carved gate, called St. John’s Gate. It is a tunnel leading to a beautiful, historic part of the city with single-storey white houses. Although at first glance, it seems to be quite small, let’s not be fooled by the appearance and do not finish your visit on a quick walk, because this medieval district with Arabic roots hides many nooks where you can not pass by without any attention. So let’s head towards the small square where you can find the town hall. This inconspicuous building hide under its roof, or in the basement, a well and a former prison, it was built around the 12th century. You can continue your walk along the main pedestrian street, until you reach the Iglesia de Nuestra Señora de Asunción, the Church of the Assumption of the Blessed Virgin Mary. Its construction dates back to the eighteenth century, but it was reconstructed in the 1960s after the destruction and fires that the building suffered during the Spanish Civil War. Right next to the church, the most important possessions of Guadalest – Casa Orduña, Fortaleza de Alcozaiba and the castle Castillo de San José, ie the castle of St. Joseph. To visit them all, you must buy an admission ticket, which costs 4 euros. The price is not excessive, so it is worth paying and going inside. Casa Orduña, also known as “Gran Casa” was built after the great earthquake of 1644, which destroyed the area, including the castle’s chambers. After the arson and plunder, that the war of succession brought with it in 1708, the Orduña family decided to restore the splendor of this place. Thanks to the renovation and maintenance of the building, you will see what the home of noble families looked like in the province of Alicante in the 19th century – on the four floors of the Cada Orduña interior you will visit the rooms of the bygone era fully equipped with ceramics, sacred collections, the Sala de la Virgen chapel, library, a map room, a kitchen with a pantry and a cellar. In addition, exhibitions on a wide variety of subjects are organized throughout the year. You can leave the Casa Orduña with the upper exit and head towards the Alcozaiba stronghold. Unfortunately, after the earthquake and the war for the succession of the Arab fortifications from the 11th century, only the ruins of the tower remained. However, it is worth climbing here not for the buildings themselves, but for phenomenal views that extend over the entire town and the adjacent landscapes. The crowning of your journey through the three jewels of the Guadalest crown is the Castillo de San José. Like almost all important buildings in this area created around the 11th century, it rises on the Moorish foundations and uses the natural terrain, which in this case is the highest hill in Guadalest. In the valley beneath it, one of the most beautiful places in the entire province of Alicante is hidden – a emerald water reservoir bearing the same name as the town. Thanks to its location, the castle played an important role both in the Middle Ages and in later times. Difficult to capture, surrounded by steep cliffs, until 1335 it remained in the hands of the Moors, who after taking him over by the Spaniards settled the local mountains, until the final exile, which took place in 1609. However, the remains of ancient religions are still present today – today, in addition to Christians, many Muslims live in Guadalest. As in the case of other buildings, the castle was marked by an earthquake and a devastating war. In 1974, its ruins, along with the town located at their feet, gained the status of a national historical monument.

This is not the end of the list of places, which you can visit in Guadalest. This small town turns out to be very roomy – it has been able to house as many as six different museums. Among them stands the Museo Microgigante y Museo de Microminiaturas, in which real miniatures reign – they are so small that a magnifier is necessary to admire them. These pieces of art were handed by Manuel Ussá and present copies of well-known paintings and buildings, which were made of tiny objects, such as a needle head, rice grain, hair bulb or flies wing. It is also worth taking a look at the Museo Etnológico, an ethnological museum whose exhibition will bring you closer to everyday life of the inhabitants over the centuries from the 16th to the 20th centuries. If your appetite for sightseeing is not sufficiently sated, the Museo Histórico Medieval (dedicated to the history of the Middle Ages), Museo de vehículos históricos (antique cars), Museo Antonio Marco and Museo de Saleros y Pimientos (salt and pepper shaker) will open their doors.

After this rather extensive, but not exhaustive subject of the entry, there is probably no other option than a personal visit to Guadalest. If there are people with a desire for a larger portion of information, a tourist information office will be available, where you can get free brochures and maps. On the practical side, we encourage you to visit the town before the high season, because during the summer Guadalest becomes a tourist destination bored with lying on nearby beaches, through which narrow streets begin to burst at the seams, losing the climate of this once almost impossible to reach place.