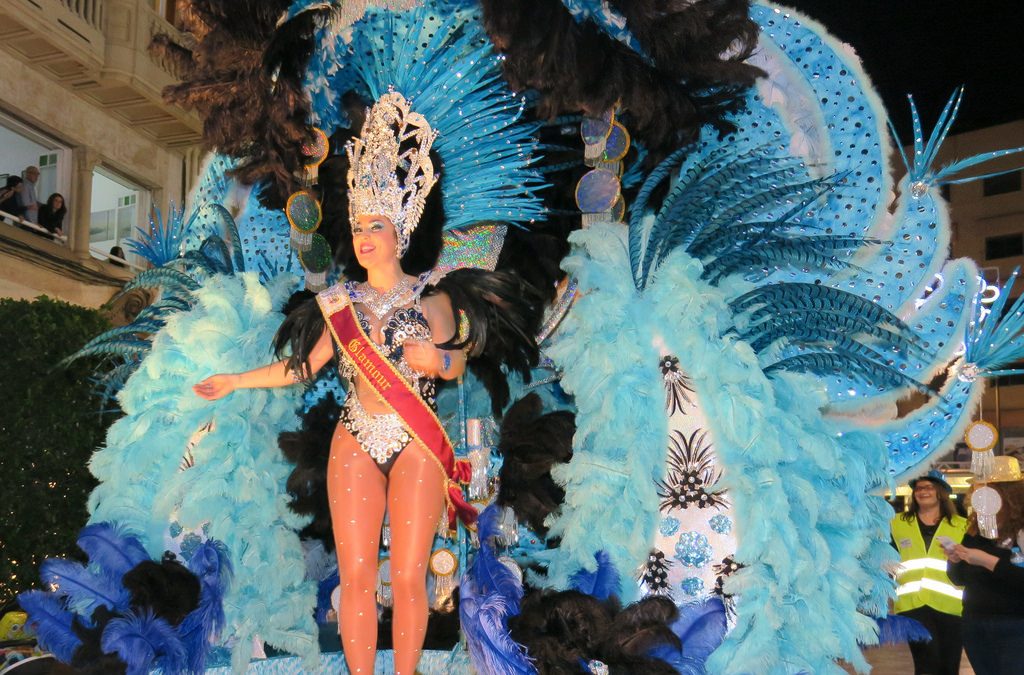 Probably most of you have never heard about the carnival in Alicante, as most people in the world associate this word with cities such as Rio de Janeiro, Venice or Cologne, and in Spain, especially with Tenerife and Cadiz. Alicante is famous for the fiestas organized during the celebration of Hogueras de San Juan, but undoubtedly the events are much more than you might think. The history of “pagan” carnival celebrations dates back to pre-Roman times, but it in the Middle Ages their celebrations grew stronger, especially in places where the Christian religion was worshiped, where all norms were violated for a few days, jokes and tricks were given to the authorities and a lot of meat was eaten, whose consumption was strictly observed in the coming period of Lent. Interestingly, the etymology of the word carnival is associated with meat (Italian carnevale means “goodbye meat”), both in the sense of gastronomy, as well as ludic and sexual. The tradition of organizing the carnival is extremely deeply rooted in the history of Alicante, however, for almost forty years of the Frankish dictatorship, it ceased to cultivate it. Only the political changes brought about by democracy allowed this practice to be vacuumed, thus giving rise to what is now known as the Carnaval de Alicante.

The essence of the carnival in Alicante is its open character, carefree and freedom, in which everyone will find their place, without zones limited only to the selected group. What is more, it is not an event subject to commercialization, which could introduce divisions on the economic background, emphasis is placed above all on unification, spontaneity and joy.

This year, the whole will begin on Friday, February 28, which is known in the Valentines dialect as Dijous Gras, and in Catalan as Jueves Lardero. Streets in the city center, such as Plaza 25 de Mayo, Calderón de la Barca, Alfonso el Sabio, Rambla Méndez Núñez, Primo de Rivera, Plaza de San Cristóbal, Santos Médicos, Virgen de Belén, Abad Nájera and Plaza del Carmen will be decorated and prepared for the Correfoc parade, which will start at 21:30. The audience will be able to admire the colorful characters in costumes, running and jumping among fireworks, accompanied by dancing devils and in the atmosphere of waiting for the arrival of Momo, the king of fun. On this day, the celebration will be crowned with sausages and a street festival.

The next day, March 1, there will be games, that will be officially open to all interested parties. At 21:30 at the Plaza del Carmen square, the announcement will officially begin Carnaval de Alicante 2019. On Saturday, March 2, there is a big day, known as “Sábado Ramblero”, during which from the south and the famous tardeo, the streets will be flooded with colors, emotions and a crowd of people. The whole will start at 17:00 from a children’s carnival, under which, accompanied by music, there will be workshops on creating costumes, face painting, and playing and having fun. The children’s carnival will be located right next to Portal de Elche, where there will also be a wall where kids can pose for photos. The Dance Club Group will take care of the music repertoire, which will make the youngest fun. In the evening, the event will move to the vicinity of the old town, where traditional costumes of cowboys, Romans or pirates mix with other more ordinary, or on the contrary, more original costumes. At 20:00, the sounds of batucadas drums fuse a lot of fun, encouraging everyone to join in the fun. At 22:00, at the height of Portal de Elche, Orquesta Atenas, together with a group of Hornets Bands, will make the time more pleasant with their repertoire, while in another part, by the torre provincial tower, DJ Christian San Bernardino, Monica Rendón and Moya DJ revive real musical madness, so that none of the disguises will drop out of their strength. The fun according to the schedule is to last until 4:30, but for those who will be unsatisfied, we recommend to visit some pubs, where no one will be ready to sleep.

The third of March, Sunday known as Domingo de Carnaval or more colloquially de resaca, will be devoted to activities dedicated to children or the elderly (who will have strength), and will take place at Plaza de la Explanada from 12:00. On Tuesday, March 5, the day of the court and procession of Pelele, ie. the straw effigy, which starts from San Cristobal Square, will pass through Labradores, Muñoz, San Nicolás, San Pascual, Abad Nájera and ends at Plaza de Santa Faz, where the puppet will be tossed on the blanket. On the other hand, at plaza de Quijano, the dance of carnival’s tuesday will be performed.

On Wednesday, March 6, “Entierro de la Sardina y su cortejo fúnebre” falls out, i.e. a traditional “funeral” of fish figures (mostly sardines), which symbolize the end of the carnival, and mark the arrival of spring, the beginning of a new stage. At 9:00 pm, a vigil will start at the Mercado Central facade, after which the funeral procession will go towards the plaza del Carmen, where the sardine will be cremated in a ceremonial way.

Later, from 23:00 will be held Gran Baile Negro (a kind of dance), which will be accompanied by a music group. On the last day of the event, on Sunday, March 10, at 12, at the paseo de Compoamor-Auditorio promenade, “Domingo de Piñata” will be organized, i.e. Sunday with piñata, during which the youngest will be able to take part in a series of competitions, among which the main attraction there will be competition with piñata. In this game, blindfolded children will test their spatial orientation to the test, trying to break items stuffed with surprise presents.