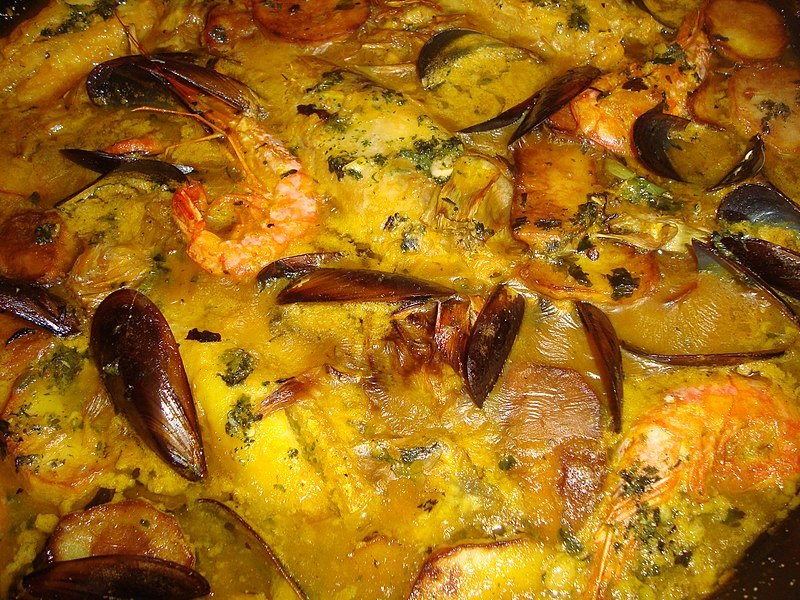 For one of our purposes, we have chosen to present delicious and unique dishes of the province of Alicante, which is why today we come back with another recipe, this time the “La llandete”. This delicacy is typical of the area of ​​Marina Alta, which most famous spots are the cities of Denia and Jávea. The name llandeta refers to the dialect of the Valencian word llanda, meaning a metal tray on which the sailors used to prepare a stew consisting primarily of potatoes, fish and some seafood. So it was a very frugal, simple dish prepared by sailors after arriving to the port, using fish leftovers, that were not suitable for sale.
Below you can read about process of preparing this dish.

A method of preparing:

At the beginning prepare fish decoction. Pour water to the pot, put head and bones of hake and sea bass, shrimp shells and heads, onion and tomato cut into pieces, parsley, salt and food colouring or saffron. Boil it, skim the scum and simmer minimum 45 minutes, season with salt and cayenne pepper at your own discretion. After cooking, pour the decoction through the strainer.

Preparing the llandeta start with putting ingredients on paellera (it is a special pan for the paella – another spanish dish). At the beginning, pour a large amount of oil on it, on which fry potatoes cut into thick slices, the same sliced ​​garlic and chopped parsley. Then add chopped tomatoes, sweet pepper, salt and a glass of dry white wine. Next, put crumbled fish – it’s best to use white fish, such as seabass and hake, which contain a lot of protein and little fat and are typical of the province of Alicante. They can be replaced by monkfish, meagre or gilt-head bream, which are also used in the original recipe. Add seafood on the top – in the recipe we mentioned mussels and shrimps, but options are many. The region is also famous for the langoustines and mantis shrimp. After adding almost all ingredients of your dish, turn on the fire, fry the whole, mixing ingredients gently. After a few minutes, pour the previously prepared decoction, drop the bay leaves and cook for about 25 minutes. Season with salt to taste and make sure, that the potatoes do not become overcooked – get the dish from the fire when it’s already soft. Before serving, it’s worth giving your dish a few minutes. In this way, you can prepare a really tasty and healthy meal, that combines the treasures of the sea and the Alicante region. Thanks to its consistency and nutritious, it saturates even the largest, hungry wolf. We assure you, that if you prepare the La llandeta once, you will certainly want to come back to our recipe.