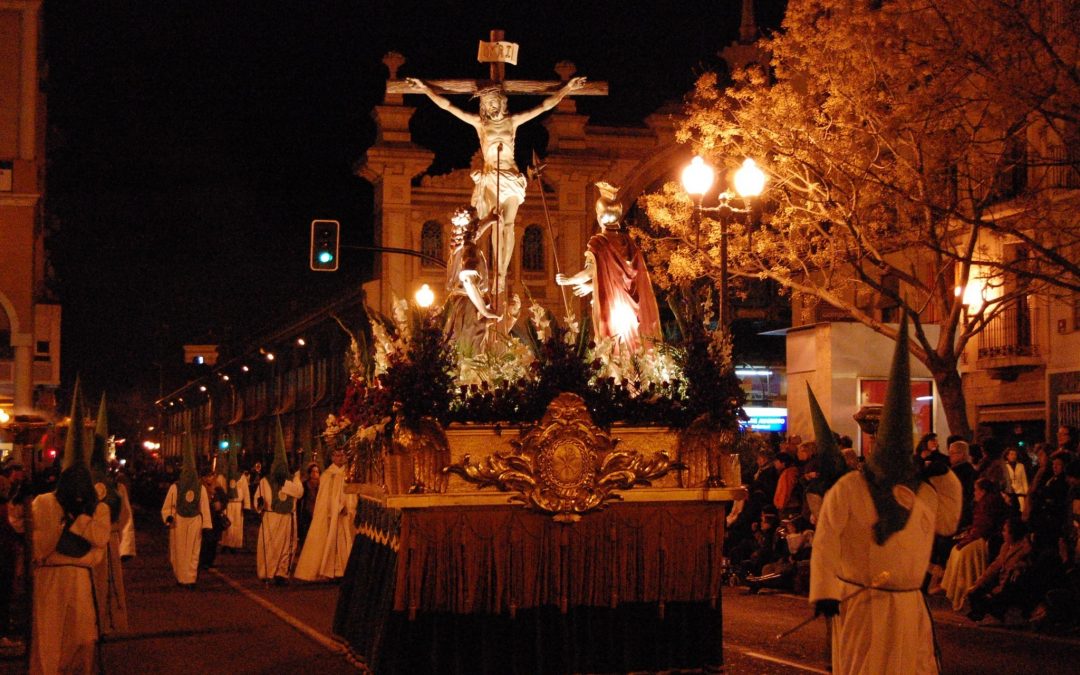 You can discover Spain in many different ways – wandering its coasts and lying on fantastic beaches, visiting historical and natural monuments, visiting museums and art galleries, tasting delicious cuisine, enjoying the famous nightlife…

Undoubtedly, the character of this country consists of various components and an indispensable one is religion, to which the Spaniards, contrary to appearances, attach great importance. That is why church holidays are celebrated here very pompously, and one of the most important fruits of the Christian tradition is Semana Santa, which is the Holy Week, whose celebrations are unique, unparalleled anywhere else in the world except Spanish-speaking countries.

In order to really feel and understand Spain, you have to, at least once take a part in the celebration of Semana Santa – in this post we would like to bring closer this tradition of international fame, so that you can feel at least a substitute of unusual atmosphere, which is present in the whole country. Semana Santa is celebrated in all Spanish cities, and every place celebrates them in its own unique way. However, they share one common factor – it is undeniably an event, that arouses many emotions, in which crowds of people, both Spaniards and foreigners, take an active part. It is also a time when in the daytime and at night, the streets pulse with the sound of thousands of steps and drums, drown in flowery colors and become an exhibition of religious art. And all this to celebrate the last days of Christ’s life, his passion, death and resurrection. Semana Santa begins with the advent of Palm Sunday, which commemorates Jesus’ arrival in Jerusalem. The great Monday is the day when the barterers from the temple were kicked off, while on Tuesday, Jesus’ death sentence was pronounced. On Holy Wednesday, Judas betrayed Jesus for 30 pieces of silver, and Holy Thursday commemorates the institution of the Eucharist at the Last Supper. Good Friday mentions the death of Jesus on the cross, and Holy Saturday, laying his body in the grave and watching. Holy Week ends Easter Sunday, during which the Resurrection of Jesus is celebrated.

The eight days of the Semana Santa celebrations are primarily associated with street, that take place every day and during which the passion and death of Jesus Christ is commemorated. The favors are prepared by cofardías or hermandades, i.e. fraternities associating the faithful. The most important element of the procession are pasos – figures depicting passion scenes, images of the Mother of God or other saints. Pasos show Christ are most often covered with gold. Some fraternities choose figures, that represent the mysterios (mysteries) – scenes before Jesus’ death, such as the entry to Jerusalem, the process, the reception of the cross, the kiss of Judas, or the image of Jesus carrying the cross. Other brotherhoods exhibit Jesus on the cross, crucificado. Pasos with the image of La Virgen Dolorosa, or Our Lady of Sorrows, are covered with silver and depict the suffering Mary, usually in the company of one of the apostles or with the body of Jesus in her arms. All pasos with Our Lady of Sorrows are covered with a palio, a canopy that is supported on each side by six rods. Often pasos are sculptures, which are real works of art of great value, created even several centuries ago. Pasos usually belong to a given church, in smaller towns these are usually paintings or small figures, whereas in large cities their sizes are much more impressive and are set on huge platforms. However, regardless of the size of the pasos, it is a great honor to be able to carry them on their shoulders during the procession. Costaleros, or people carrying the pasos on shoulders and neck, are the most important members of the procession. Their duty is to raise, move and lower the platform. It is an extremely difficult and exhausting task, requiring months of preparation. Pasos usually weigh about two tons and are carried by 40 costaleros, who for about eight hours keep on their shoulders a fifty kilos weight. What’s more, they are completely hidden and hidden under the platform, that’s why they are led by their capataz, the person responsible for managing the procession. Costaleros move from the paso to the rhythm of music, thanks to which you can get an impression from the outside that the figures are moving by themselves. Depending on traditions and customs, the parasites in each brotherhood will be moved and moved in their own way. The next important people in the procession are nazarenos. These characteristic characters usually march in silence in pairs before the paso. They are clothed in a habit, covering the face with a pointed cap called capirote, and they carry cirios (thaws), varas (stick) or lantern in their hands. The color of the habit may vary depending on the fraternity and the place it occupies in the nazarenos procession. At the head of the procession is the Cruz de Guía, meaning the cross which symbolizes the Christian character of the procession. A musical group follows the band, and before the figure there is a person performing saetas, religious songs derived from the flamenco style (most often this takes place in the south of Spain, in Andalusia). In some places, the processions pass in complete silence. Other characters who take part in the parade are the diputados de tramo, whose task is to maintain formation, altar servers carrying candelabras and incenses, and penitentes carrying wooden crosses as part of street penance. In addition, in San Vicente de la Sonsierra, in the province of La Rioja, you can also meet flagellantes, who practice the tradition of public whipping on the back.

Also interesting is the history of this extraordinary tradition, which is the organization of the procession during Semana Santa. It is inseparably connected with the creation of the first hermandades and cofardías, or brotherhoods, which took place around the 15th century (some sources even date back to the 13th century). Secular people created them, and their main goal was mutual support in difficult moments, such as illness or death, and sharing the passion of Jesus together. It was the desire to show Christ’s pain during his last moments of life that resulted in the passage of marches to the streets, which were divided into los de luz (light), a form reminiscent of today’s processions, and de los sangre (bloody) during which the act of self-flagellation was performed. Other researchers claim that the processions have their roots in religious spectacles that were found in churches. With time, the actors were replaced with images of wood and fabric, and theatrical scenes with static images. The art of creating figures is called imaginería and two main trends stand out in it: Castilian and Andalusian, both originating from the Baroque. You can still admire the fruits of this art on the streets of Semana Santa. The real culmination of the processions was in the 17th century, which was a consequence of the Counter-Reformation, ie the movement in the Catholic Church, which was the response to the Protestant reform of Martin Luther. In other words, the spreading of the Catholic faith led to the consolidation and spreading of the tradition of processions throughout Spain. Another milestone in the history of the procession was the prohibition of self-flagellation introduced in the eighteenth century by King Carlos III, when his Enlightenment advisors acknowledged that this act is not an expression of “sincere devotion”, but only “a significant exaggeration”. In turn, in the nineteenth century, music groups were introduced to the procession and the international celebrity of the Semana Santa celebrations began to grow from around 1960 and it does not decrease until today. The huge interest that Semana Santa enjoys among foreigners has guaranteed her place on the Fiestas de Interés Turístico Nacional list, ie events that attract crowds of foreign tourists.

We hope that today’s post has brought closer the general outline of the celebrations of this extraordinary period, which is the Spanish Semana Santa. However, we strongly encourage you to experience it on your own and precisely on your own senses – the perfect place for it can be undoubtedly Alicante.